Having inherited the car, in the 1990’s, retrieved it from its resting place in the garage and inspected it, we decided to have BBM69 restored.   We had to make some important decisions.  What type of restoration did we need?  How much would it cost?  We knew it would be a body off job, so an in-depth rebuild was going to be required.  We did not set out to have a Concours finish but just to have the car done properly.  We did want a car we could use for continental touring.  In the end the result achieved by Ian Bancroft exceeded our expectations.

Dianne owns BBM69 and the car has been in her family since 1944 so we were familiar with the Ruby.  We both learned to drive on Austin Sevens,  went on honeymoon in BBM69 in 1964 and used her as our first car, when living in Horning, Norfolk.

AS FOUND IN MONTY’S GARAGE

Luckily, in 1997, we found Ian as he was starting his BANCROFT RESTORATIONS business.  I think we were the second rebuild he had done professionally.  He had done several other A7’s before as well as working full-time.  The engine was the first job and after that the chassis.  We delivered the body to Ian and the serious work started.  We were also lucky in that BBM was complete, so nothing important had to be found for the restoration. 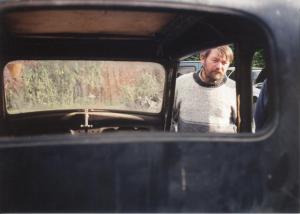 Ian considers what will be required!

We  liaised with Ian frequently and came to joint decisions on what needed doing.  Ian of course decided how things would be achieved.

After the body had been shot blasted Ian had it back for the long job of repairing and rebuilding the woodwork and metalwork.  The respray was done in Fiat Amarant 186 a maroon colour we picked by touring the car showrooms.  Now , in 2020, I have found a paint touch up pen for this colour on the internet.

Dianne would have liked to have had all black, but Ian and I thought black would be more demanding to achieve and keep a good finish. 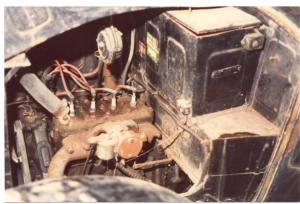 All there but lots to do.

All the chrome was re-plated and the electrical components refurbished even the wiper motor.  Once the car was re-assembled we set off home, this was March 1999.  We were half way over the A17 when we had a blocked main jet in the carburetor, that was a bit hairy to say the least.  Ian had told us that there would be a shake down period, we expected this, after so long off the road setbacks are to be expected.  We were very happy with the finished job and still are today, 20 years later.

Having driven the car, at night, it became obvious to me that we needed flashing indicators for safety.  These I retro-fitted.   I have also fitted dipping LED headlamp bulbs, much brighter and a lot less of a drain on the battery.

In 2020 we deided to have the seats rebuilt.  The last items were delivered to us on the 7th of September 2021.

The car has had a lot of interest shown in it and has been presented with many awards.  We have driven over 35,000 miles in BBM since 1999 so it cannot be said we are just pot hunters.  However we are very proud of the car and do look after her as is deserved. Though we did take her to the NEC on the trailer, twice, to keep her clean!  That was when we were asked to put her on display on the PWA7C stand, at the Classic Car Show.

We have been lucky in that, when Dianne’s family garage closed down, we inherited all the Austin Seven bits and pieces.  We now have a spare two bearing Phoenix crank engine complete with all ancillary equipment.   A three bearing crankcase, crank and block, as well as a spare front and back axle and lots of small items.

I have recently, 2020, started to re-furbish the bits and pieces we inherited.  It is my intention to restore the spare parts we have to the best condition I can.  This will include replacing any suspect bearings and replacing worn seals with modern ones. 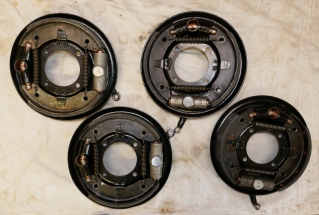