ADD A 6V TO 12V CONVERTER FOR SAT NAV

6 VOLT TO 12 VOLT CONVERTER FOR SAT NAV ONLY

While in France on holiday in BBM69 we visited Keith and Carol Fair, (See Holidays 2005).  During our chats Keith Pointed out the possibility of using a DC to DC converter to power a Garmin Satellite Navigator.  Some time later I obtained the hardware then forgot about the project.  However, on sourcing a new charger for BBM I realized that the connection would be ideal for the sat nav project as well.

The charger is an AccuMate 6-12, it is a versatile, 4-step automatic charger and maintainer for 6V and 12V lead-acid batteries.  (See photo 1).

In addition to the standard clips the charger comes with a fused lead that can be permanently attached to the battery terminals (See photo 2).  The lead terminates in a Tamiya connector, I made up a matching socket and lead attached to the board of the converter.  Care is needed as I was using the charging lead socket as a power out connection instead of a power in one.  This reverses the normal male/female positive/negative pin arrangement.  Connect the leads after the isolation switch as the converter draws a small idling current.

The DC to DC converter was a TRACO POWER THB 3-0512 That converts 4.5 to 9 volts DC to 12volts DC at a maximum of 250 mA.  This has proved ample to run my old sat nav.  We had a proving run with the screen brightness and volume on 100%.  I made it work hard re-calculating as we went along.

However I recently purchased a new sat nav, this one has a dash cam built in.  It worked fine for hundreds of miles however on a short run recently the sat nav screen went blank.  It soon became obvious that the power converter was cooking.  I have obtained a more up to date converter (TRACO TEL 3-0512).  Unfortunately this version has a different pin layout  and has dual output so a new pcb was required.  A 2 amp slow blow fuse is required on the input side and a 250mA slow blow on the output.  I also chose to retain the LED to indicate power was on. 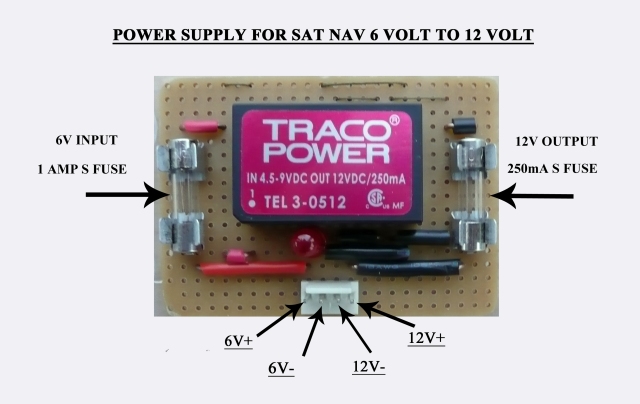 I attached the leads with a plug but they could just as well be soldered to the PCB.  The output is through an in car connector to match the Garmin set up.  I use the hole and grommet for the horn cable as an entry to the dash board. (See photo 4).  I have used this set up for hundreds of miles driving with no problems, even with the new Garmin Driveassist-50 with a dash cam in it.

HOWEVER IT DID EVENTUALLY BURN OUT!

I now use a Fulree DC to DC unit. 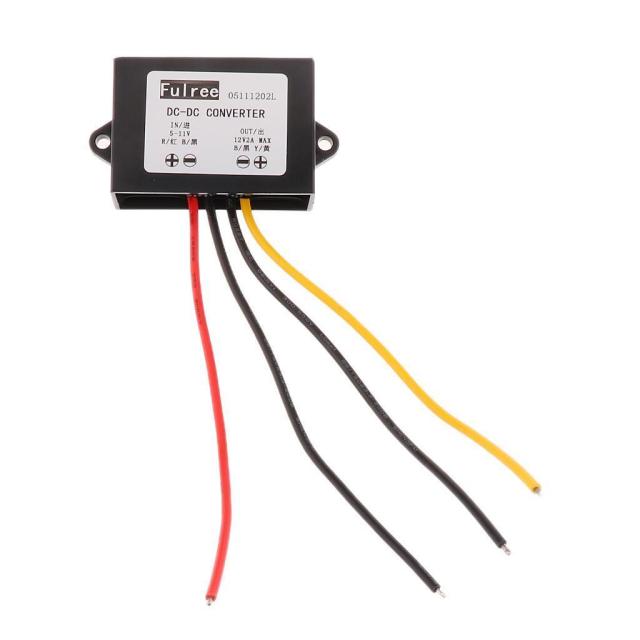