AUSTIN & RELATED BOOKS I HAVE

No date on this but it has the Big Seven Sixlight in it so must be late.

Covers all models from The Seven Ruby to The Twenty Mayfair.

THE LIVES OF KEN WALLIS

Most of us are familiar with James Bond flying the autogyro ‘Little Nelly’ to defeat the baddies in ‘You Only Live Twice’, that autogyro was designed, built and flown by Ken. The subject of most interest to us, in the Austin Seven world, is the fact that Ken built three Austin Seven specials before the Second World War. One of them was very special indeed. Indeed it is the white car at the top of the book cover.

In the book Ian Hancock sets out to explore the engineering, nautical and aeronautical exploits of Ken Wallis. I was aware of much of Ken’s autogyro activities having seen him fly at various air displays. I was not aware of his war record, his expertise in building special motor cars, his winning ways with hydroplanes, or his work as an Armament Officer after the war. I was an armourer and indeed familiar with some of Ken’s developments from a users point of view.

Ian has based his book broadly on the chronology of events while dealing with related subjects in the same chapter.

The narrative is well supported by numerous photographs of Ken’s activities, and the author obviously knows Ken well. It is as if Ken was recording events with publication in mind! I knew a little about Ken Wallis before I read the book, I soon learned a great deal more. From an engineering point of view Ken is revealed as a hands on problem solver of the very best kind. Practical solutions to complicated questions abound in this book.

Has the author succeeded with the book? Yes he has; he has fleshed out the parts of Ken’s work I was aware of. He has revealed areas only guessed at and then shown some examples I would not have thought possible, miniature working pistols the size of a ten pence piece. He also had to make the ammunition.

This book will be really useful in the years to come as it gives an insight to techniques, technologies and tools relevant to a 1936 car.

Chapters include: Drills and drilling, files and filing, reamers, soldering and brazing.

Much of the information is known to mechanics of my generation but in a few more years a lot of this will be a dark art. Hence I think this book needs to be retained with the car.

This book takes you from dismantling to re-assembling the engine. Including decarbonizing, valve reconditioning and tuning.

Again much of the information is known to mechanics of my generation but in a few more years a lot of this will be a dark art. Hence I think this book needs to be retained with the car.

Starting with basic electrical theory and principles the book deals with the whole electrical system as found on cars of our era. Dismantling, cleaning, repairing and re-assembling.

Again much of the information is known to mechanics of my generation but in a few more years a lot of this will be a dark art. Hence I think this book needs to be retained with the car.

This little booklet has been reproduced from an original by the BRISTOL AUSTIN 7 CLUB with kind permission of CASTROL in 2012.

It does exactly what it sets out to do, explaining how when and where to lubricate an Austin Seven. Included in the back is the well known fold out chart. I believe this booklet is still available from the Bristol Club.

Possibly the most well known long distance drive in an Austin Seven. From Buenos Aires to New York.

In a 1925 Chummy rescued from a life pulling boats up on to the shore from the river in Oxford.

ALEXA  THE LIFE AND DEATH OF AN AUSTIN 7 RUBY

In 1968 Brian Milton fell in love with a girl called Fiona Campbell, who lived in South Africa. She agreed to marry him and he resolved to drive a 1937 Austin 7 Ruby called Alexa across Europe, the Sahara Desert and the tropical Congo to claim his bride.

The car didn’t make it, but a great many adventures occurred.

Around the world in an Austin Seven.48000 miles a classic long distance drive.

This is a book that is exactly what it says it is, a workshop manual for an Austin Seven.

I found the book very useful for tackling such tasks as striping and refurbishing the rear axle. It is the sort of job I am likely to only do once or twice in my lifetime, I hope!

The style of writing makes it easy for step by step work to be undertaken with confidence. All the various marks and models are dealt with in an easy to understand format.

This is a huge book running to 544 pages. Winner of the Society of Automotive Historians’ Nicholas-Joseph Cognot Award for the outstanding book of 1989.

All known 329 Austin Seven variants listed and described in detail. Including photographs, works drawings and specially commissioned drawings and charts. This book is INDISPENSIBLE  for owners, restorers and enthusiasts alike.

This book seems to fit in the category of  book about Austin sevens in general. Packed with photographs, facts and figures and the history of the Austin Seven throughout its’ life.

Covers all production versions with lots of colour photographs. This book is very useful when you are finding out how a particular car or part of a car looked. It covers the inside and outside of the car. very useful when refurbishing with an eye to originality.

The original idea for this book came from Roger, Colin’s barber. There was a book a few years ago called Masquerade and in the book were clues to lead you to some real treasure buried somewhere in England – a golden hare covered in jewels. The book was a huge success and Roger came up with the idea of having a car hidden away for someone to win. He had just finished restoring an old Porsche and wanted to use that, but Colin thought a vintage Austin 7 would be much better. It had a lot more character and suited his style of illustration. So Roger went out and bought Ruby, a 1934 Austin Ruby. Colin wrote a story, took lots of photos of the car and did the pictures. He hid six letters and numbers through the book that made up Ruby’s numberplate. Lots of people got the correct answer – GHC384 – though all those who thought it was CT1993 were quite wrong. That was just Colin signing the pictures!

A year later there was a prize draw and the car was won by a vintage car enthusiast from Wales.

Published in 1983 by John Platts, and with John’s permission, reprinted in 2009 by John Barker.

This is the catalogue of spare parts ans services as available from The Austin Seven Centre in 1983.

This out of date book is still very important, it is often referred to as Platts’ Bible. 163 pages of drawings and lists of parts form an invaluable source of information.

THE BOOK OF THE AUSTIN SEVEN AND EIGHT

This book is a relatively small book but covers Austin Sevens from 1929 to 1938, including sports models. All bBg Seven models. and all Austin Eights. It is an owners handbook. It is part of the Pitman’ Motorists’ Library.

THE MOTOR FOR THE MILLIONS

A DIGEST OF TECHNICAL ARTICLES

FROM THE PRE-WAR AUSTIN SEVEN MAGAZINE

The cover says it all.

A collection of articles on servicing and other interesting topics such as the John O’ Groats to Lands End run of 1982.

This book is a detailed history of the Austin motor car over the whole of it’s production lifetime.

This book tells how a successful “750” racer was deaigned, built and raced.

This book is an invaluable collection of articles from the 750 club in what was probably it’s most innovative time.

I have two copies of this book, each with different cover pictures. The first was published in 1999 and the second in 2011.

The books seem identical inside. Being a shortish introduction to the Austin Seven. 32 pages.

This work sets out to provide a complete history of Austin Sevens in competition at home and all over the world. Not being an expert on racing matters, being a Ruby driver. I do marvel at the scope and size of this book.

Covering all Austin cars from Seven to twenty-eight.

This is an owners handbook.

First published in 1972 this edition reprinted 2004 by the Pre-war Austin Seven Club with permission.

A collection of articles from MOTOR SPORT.

A study in building and racing Austin Seven Specials. this book has long been one of my favourite books. I used it  when overhauling my back axle. Good practical advice for any owner not just the racing fraternity.

An in depth study of ‘Bill’ Williams history with Austin Seven Specials. This book has been written by an acknowledged expert on L M Williams who indeed owns several of his cars and uses them regularly.

Not an Austin book but interesting all the same.

A guide to cleaning, refurbishing or replacing the interior of classic cars. dealing with all aspects of leather work and other interior trim.

The Michelin guide to Great Britain for 1922. Not exactly an Austin Seven book but an insight into the motoring world as it was when the Seven was introduced. For example “The Michelin Puncture Alarm may be fitted” This involved fitting a cap with a small explosive cartridge in it, then if the pressure fell the cartridge was fired. Thus warning of the danger. Not legal today though!

Interesting and amusing tales from Austin Seven friends and some from the Bristol Austin Seven Club magazine.

I have two copies of this book, the first edition is written around the 1926

the second is the sixth edition third reprint in 1947. The second book has appendices to cover the changes over the years. This is the book that covers our ARR (mk2) Ruby.

The books are an expanded owners manual covering washing the car, called “Grooming and Tending” to care of the electrical equipment.

covering all sorts of cards from those from Sugar Puffs to German cigarette Abdulla.

A book for reading aloud to children or for early reading. This is a collection of stories about vintage vehicles and there life in a small country town.

One of PITMAN’S SIMPLY EXPLAINED SERIES.

this book attempts to explain the main principles of the “modern” car in simple terms.

THE RESTORATION AND PRESERVATION OF

This book does just what it sets out to do. I found the chapter on the aesthetics of restoration very interesting and useful. after reading this chapter we decided not to have new leather on the seats but reconditioned the existing leather. It looks old and tatty but seems to fit in OK with the resprayed body.

No date for when published but from the contents early 1930s. On the internet it says 1956 but I doubt that.

A thin publication with some good photographs of early Austin Sevens.

An interesting read.  For items such as steering they rely totally on the experience of the examiner. 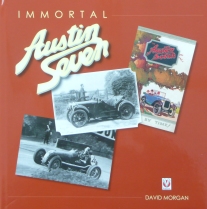