BBM 69, an Austin Ruby Saloon, ARR, was first registered in March 1937.  She was originally owned by Rupert Owen who lived near Banbury, Oxfordshire, he owned and drove buses for a living.  Monty Smith, father of the present owner Dianne Davies bought her in 1944 at Upper Boddington for £75, the family had grown too big for the three-wheeler they had at the time.  After the war Monty owned a garage in Suffolk and BBM69 was used as a runabout and taxi, it was not unusual for SIX people to be carried to a dance on a Saturday night! 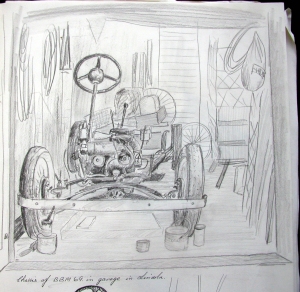 The latest, and last, restoration began in 1989.  It only really got underway when she was handed over to Ian Bancroft in July 1998.  The complete body off restoration was finished on the 27th of March 1999, in time for us to celebrate our 35th Wedding anniversary with a run out to lunch in her the next day.

OUR ANNIVERSARY RUN OUT

Since that day BBM 69 has traveled over  35,000 miles.  Including taking us on a journey in 2005 through Spain and into France.  The holiday included a trip over the Col de Aspin in the Pyrenees.  This involved climbing higher than Ben Nevis.  2010 saw a trip from Wales, around Ireland to Scotland, and home.  A trip of nearly 1500 miles.

BBM69 is set up for continental touring, for reliability a modern Phoenix crankshaft is fitted, the original cranks were fragile, we have had two cranks fail in use, one catastrophically!  Since the 1999 restoration BBM has covered over 35000 miles.  Visiting Spain, France, the Netherlands, Brittany, Scotland, Ireland and Wales.  In 2017 we visited the Isle of Man to drive the TT Mountain course.  We completed the thirty-six miles in one hour, eighteen minutes and twenty-six seconds.

Things do not always go according to plan.  In 2006 we had to abandon a holiday to Brittany in BBM 69 because of a blocked exhaust.  We carried on in our modern.  In 2007 we had a broken dynamo bearing on our way to Norfolk.  That’s life with a 83-year-old car.  They didn’t need to send such a big truck to take us home.  We got a few smiles on the way.